The start-stop-continue of motorcycle riding 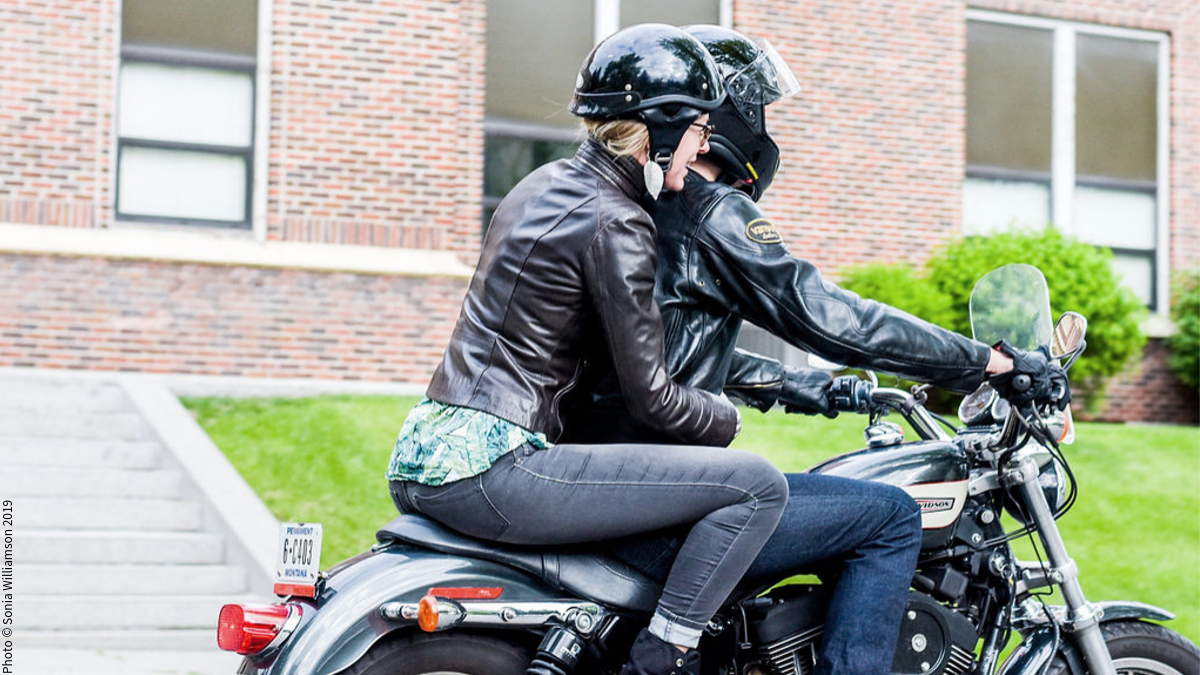 We move together, like one unit. I read his body fluently; he leads implicitly. I trust him. I’m used to following his lead, and he’s an experienced driver. Accelerating — crouching a little. Breaking — relaxing into him. Turning — leaning into it a bit, but not too much. Following the movement of his body, just like when we dance.

Years of dancing tango together has made us intuitive to each other, and it’s coming in handy as we are learning our new bike, and each other’s movements on it.

We picked it up last week and named it Francesca. She’s a fiery Italian and the name suits her.

Any good partnership is like a dance. Or, like a motorcycle ride. It is knowing your partner well enough to read their body language, to hear what is not being said, to communicate without words. And, to use words effectively to provide feedback and work out the things that aren’t quite flowing as well as they could.

For example, when he accelerates or breaks too fast, it is hard on my lower back as I brace for gravity. It is helpful for him to know this, so we talk about it. He figures out a different way of breaking, rounding his back so I have more to lean on, and it fixes the problem.

Our first week with Francesca has been good. Warsaw is the perfect city for riding a motorcycle and we get plenty of both highway and neighborhood street driving in. Parking is easy with a motorcycle, which makes seeing the interesting places of the city a breeze. I love this mode of transportation. It’s fast, easy and convenient, and you gain a visceral feel for a city that you don’t get in a car.

I feel ready for the open road, for experiencing more of Poland in this way. For crossing the Baltic Sea and making our way north through Sweden, keeping to coastal roads as much as possible.

STOP: Everything was going well, and then…

Everything was going so well. We’d spent the day each doing our own thing: The Professor, visiting Grandfather Jerzy, and I, writing at Hala Koszyki, where a classical piano concert was being played by a blonde woman in a red dress.

Koszyki is an ultra-modern indoor market and culinary hotspot in the center of Warsaw, with a long history as the People’s Bazaar. It dates back to the early 1900s when it was built on the grounds of an old farm bearing the Koszyki name. It was revitalized in the 90s along with the “new” Poland, and reopened in its current, vibrant and trendy form in 2016.

This week, we are staying on the top floor of a 7-story apartment building directly across from Koszyki on ul. Koszykowa, and when the apartment gets too hot, I go over there to hang out, people watch and work.

Once The Professor got back from his visit, we took Francesca to Nocny Market, or the Night Market, one of our favorite outdoor spots in Warsaw. The old, now defunct former Main Railroad Station has for the last three summers turned into a food truck fest complete with colored lights and a DJ playing techno music on weekend nights.

We discovered it on our trip to Poland last year, and learned this would be the final year of this beloved Warsaw summertime event at that spot, as the old railroad station will be torn down and give way to modern construction.

Here, you can find foods from all over the world. After trying in successive order some Polish herring, Swiss Raclette cheese with prosciutto, and finally Korean bulgogi beef on a sandwich, while sipping sangria (for me) and some nice Polish beer (for The Professor), we hung out for a while engaging in more people watching, one of our favorite activities. Nocny Market is a great place for that.

Instead of going straight back to our apartment afterwards, we decided to go for a ride.

It was a beautiful evening, and I’m getting a keener taste for motorcycle riding. Especially at night, in a big city. We headed down to the riverwalk along the Vistula, our other favorite outdoor spot in Warsaw, to join the rest of humanity for a Sunday stroll. We stopped to see the Warszawska Syrenka (the Siren, or, more accurately, the Mermaid of Warsaw). A young Ukrainian street musician was playing guitar and singing, and the evening was warm and lovely.

When sh** hits the fan

But, it had been a long day and we soon decided to head home. We had our helmets, but neither of us were wearing our armored jackets, so we took back roads, avoiding the highway while exploring the city streets. We were just about to pull into our neighborhood when I commented how much I love riding through the city at night.

“Yeah? You want to ride some more?” The Professor asked.

“Sure!” I said, happy to go for another little loop around the city center.

As we were cruising along down a wide, gently sloping avenue, Francesca coughed, then stalled.

Perplexed, we pulled over into what turned out to be the Russian Embassy.  (This little fact is not relevant to the story other than making it really easy to remember where we had to abandon the bike –– or, perhaps, where Francesca abandoned us.)

We kept trying to coax the engine back to life –– it would turn over like it was trying to start, but that was it.  There was nothing more to do but park the bike, hail an Uber and head home, defeated.

We are supposed to leave in two days. Will the bike get fixed in time?

There are storm clouds over the city. The last few days have been oppressively hot and humid, and today has brought bouts of rain, hail and gusty winds. We’re feeling the effects of the atmospheric pressure in more ways than one. I’m having a difficult time embracing that growth mindset today.

The saga of Francesca continues. Like a mercurial lover, she’s hot, and then cold again. Just when we were starting to fall hard for her, she left us hanging.

The Professor went back this morning to where she abandoned us last night, near the Russian Embassy. She started up immediately.

Fortunately, he already had a visit to the mechanic scheduled today, to get her checked out before our planned road trip tomorrow, and he drove her there and dropped her off with no problems. When he got the call to come pick her back up from the shop, we were excited. Looks like we’d be able to make our ferry crossing in two days after all!

He made it almost home before Francesca stalled again, two blocks from our apartment.

Not because the bike stalled, mind you. That was disappointing, sure, but to be told he’d rather deal with this without me?

How dare he insinuate having me come along to the mechanic would complicate things?  We are on an adventure. Which means, we are in this together, aren’t we?

After all, I was there when the bike broke down last night. And, as much as it sucked to get stranded on the bike, I rather didn’t mind the experience. This was exactly what we came for — adventure.

I was well aware I wouldn’t be much help in this situation. I know nothing about motorcycle maintenance, I don’t even know how to drive the damn thing. But, I wanted to be part of the action. Besides, I was all dressed up with nowhere to go, since our plans for the evening flushed down the drain when the bike broke down again. I realized this had nothing to do with trying to be helpful to him, this was all about me, and my need for validation and belonging.

Later on, when we finally had a quality conversation over a better dinner and a nice glass of wine, we created space for us to both feel seen, heard and understood. We were able to step into each other’s perspective and see the situation from the other’s point of view.

I love Warsaw, but my world is rather small here. Until i learn the language better and how to get around the city on my own and have places to go like a gym and regular routine-type things, I’m rather dependent on The Professor. Autonomy is one of my highest social needs, and here, I have very little of it. Here, he’s my guide, my translator, and even my chauffeur. I appreciate it, but it also means i feel a bit lost on my own.

For him, this is his home turf. It is his city, he speaks the language, navigates easily –– he feels at home here. He is just trying to take care of business as safely and efficiently as possible. He preferred that I wait at our apartment since he didn’t know if the problem would reoccur, and it would be difficult to balance the bike with a passenger, if the engine were to suddenly quit again.

He asked me some insightful question, which lead to better understanding for him, and greater self awareness for me.

We still have no bike when we wake up this morning. It is the day of our intended departure. We have hardly any food left in the fridge, just enough for today’s breakfast. The coffee creamer is already finished off. The laundry is done. Our bags are mostly packed.

We are cautiously optimistic.

When we finally get the call from the shop just after noon, they told us they couldn’t be certain they had fixed the problem, since they weren’t able to recreate it.

They asked us to pick up the bike, drive it around, and then, if it seemed to be working, we would “talk about it.”

It is almost 4pm when we finally get on the road, eight hours later than planned. This is our first time loading our luggage onto the bike, and it takes some time to figure out the mechanics of it, making sure the load is balanced and tight. If all goes according to plan from here, our life will consist in three small bags on two wheels for the next couple weeks.

The bike seems OK, but we don’t know for sure if it will make it over a long distance. But, in adventure, as in life, nothing ventured is nothing gained. We head on out onto the open road.

First stop: Poznań. Let’s see if we get there!